Chimpanzee Trekking in Rwanda is done in Nyungwe national park one of Rwanda’s prime national parks located in the south of Rwanda. The two areas where chimps can be trekked in Nyungwe are Cyamudongo and Uwinka. Chimpanzee trekking off with a briefing at the headquaters where you are told about how the whole activity is done and how to behave when you get close to the chimpanzees. Chimpanzee trekking begins early morning with visitors expected to arrive at the briefing point in Uwinka to start trekking at 5:00 am. You are allowed to stay 1 hour with the chimps after locating them with the help of your ranger guide. 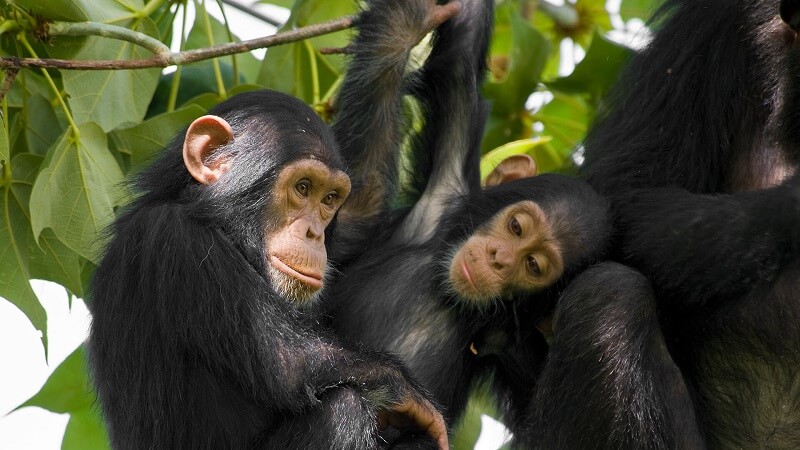 In so many ways, tracking the chimps is so different from the mountain gorilla experience, so unlike the mountain gorillas, the chimps are moving constantly around and at high speeds, jumping from tree to tree making noise. But the gorillas are usually found sitting eating quietly with in the forest clearings. The other big difference between these two is the tracking experiences and by this the gorillas, one is usually allowed one hour of observing and taking photos of them, but with the chimpanzee tracking in Rwanda, there is no limit, keeping up with them is also the main challenge and the biggest determining factor of the amount of time that is spent with them. Of all the rimates that are found in Nyungwe forest, it’s the chimpanzees that are the famous ones and core wildlife attractions in this national park.

Where to go for Chimpanzee Trekking in Rwanda

Chimpanzee trekking in Nyungwe forest starts off from three reception centers, that’s Uwinka, Kitabi and Gisakura where the tourists meet the park rangers and the tourists are also expected to be at the reception as early as 4: 30am and by 5 am, you drive to the starting point of the trek into the forest. Since the chimps nest each and every night, there are the trackers who go ahead of the trekking group of finding them and communicate with the ranger guides. The tourists spend only 1 hour with the chimanzees in Nyungwe forest National park, and get to observe them so closely going about their own lives and see the human like features and behavior that makes them our closest relatives with 98.7 % DNA. The chimps also communicate by way of deafening screams, the loud hoots and booming hitting of the tree barks and the buttress. It’s such a hair rising moment like no other and so memorable.

These habituated chimpanzee group in Nyungwe forest is also bigger with about 60 individuals and due to the greatness of the forest and terrain, it gives few chances of seeing the chimps, while the group in Cyamudongo forest that has a smaller number of about 30 chimps giving the most successful sightings that are given in the small size that is covered to find the chimps in any part.

Chimpanzee trekking experience is so different from that of gorilla trekking as the chimps are running around in the tree canopies and there may be running after to catch up and the sightings are more rushed and sporadic.

The section of Nyungwe Forest National were the chimpanzees are tracked also begins in Cyamudongo, a 4 and half hour drive from Kigali. This forest is also Africa’s oldest montane forest and its home to over 13 secies of primates including over 500 chimpanzees. Also as you pass through the forest, you will hear the whoops and the cackles of L’Hoest’s and the black faced vervet monkeys.

The main challenge with these chimpanzees is with finding them, as they are not so habituated and are always shy, also their human instincts are so strong and they show a lot of curiosity and the eagerness when the tourists are around.

The humans and the chimpanzees share 98% of their DNA, making them more exciting to be observed, most especially when they display what we call human behaviour. Chimp trekking is so fast paced and so exciting and in our opinion which makes it more of the adventure than gorilla trekking. There are also few well established paths, denser forests to go through and discovering them on one’s own also makes it more exciting.

The chimpanzee trekking permits are also $100 which is less than that of the mountain gorillas. There are over 64 permits per day that are issued in Rwanda for chimp trekking and only 8 people per day for chimpanzee tracking. Therefore it’s advisable to book these permits well in advance and a year is not too soon.

Considering Rwanda for the primate adventure is financially more conceivable when considering the chimpanzees instead of the mountain gorillas and it’s an option that will not disappoint. More so, there are many stories of the people that are coming to Rwanda and bumping into the gorillas as you travel in the forest and the sightings at one of the lodges. The mountain gorillas are also habituated and also feel somewhat more comfortable around the humans and have been known to venture to the lodges in search of food. There are also no guarantees of this happening, and in case you are lucky it’s very possible.