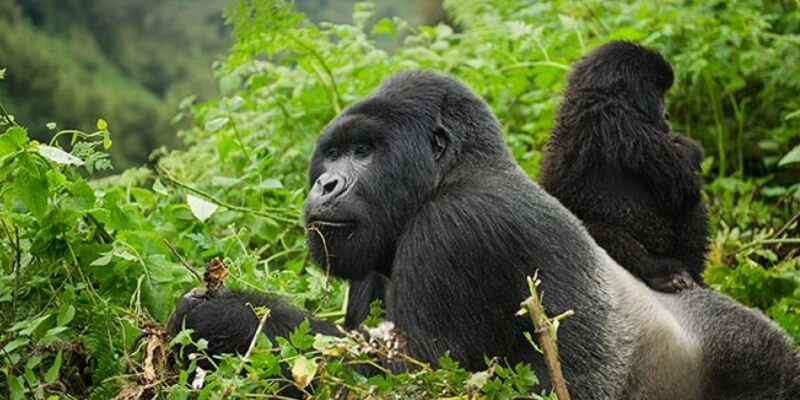 Silverback gorilla tours brings you some of the facts about Mountain Gorillas one oughts to know before they go mountain gorilla trekking.

Mountain gorillas can only be found in two places that cover three countries on our planet. The two places are Bwindi Impenetrable National Park and the Virunga Massif, an area that spans the borders of the three countries; Rwanda, Uganda and the Democratic Republic of the Congo (DRC).

The Mountain gorillas live in the high altitude montane and bamboo forests at 1,500-4,000 meter elevations. which makes the Virunga-Bwindi area conducive for them because the national parks have biologically diverse plants and are mountainous at the same time.

A fully-grown male silverback weighs an average of 140-180kg, but it mainly feeds on leaves, shoots, and stems. However, what they lack in variety, they make up for in quantity. These huge mammals spend over half their time looking for food for their family groups.

The lush, green forests found in the mountains are perfect for these amazing apes. But, with approximately 4 million people living within one day’s walk of Virunga National Park, has increased the degradation of the agriculture development, hence destroying the natural resources found in the mountain gorilla’s natural habitats.

Mountain gorillas could be our size, covered in fur, and walk on all-thumbs, but we are more similar to gorillas, we share around 98% of our DNA with these huge beasts?

Mountain gorillas have unique identifiers. Whereas we have fingerprints, gorillas each have a distinct pattern on their nose! As well as our biological similarities, we have geographical similarities too. The landscape where you find mountain gorillas is also home to some of the world’s highest densities of rural human populations. The proximity of humans brings a whole host of potential threats to the gorilla’s well-being, including the spread of disease, getting caught in snares or traps and human-wildlife conflict.

Mountain gorillas are a lot calmer than their sensationalist famous counterpart, King Kong. To respect their natural behavior and ensure that gorilla tourism is responsibly managed, each habituated gorilla family is visited by just one group of 8 tourists per day and that visit is strictly limited to one hour!

Why Opt For A Long Term Car Hire In Rwanda

Long term car hire in Rwanda means renting a vehicle for more than a month.…

For many road-trippers who are planning a safari to Rwanda, you must have heard of…

Top Historical Sites You Must Visit In Rwanda